It’s our new ritual and part of our coping mechanism that we get a coffee out of the petrol station before heading up to the hospital. It helps me feel awake and I imagine it to be my one happy time in the day until we next load Nate into the car at home time. But, this morning was different.

I stood at the coffee machine beside everyone else waiting my turn and my knees felt like my body was just getting too much to carry. It wasn’t my body though it was my head that bared the heavy load so forcefully. I felt like my mind was running in a time delay as everyone rushed around heading off to work. I wasn’t heading to work though, and it killed me inside. I wanted everyone to know that my baby was hurting and that we were hurting for him too. It didn’t seem fair and if I thought for one second it would have made any difference I could have easily got on my knees and begged for someone to help my baby. I knew they couldn’t but I battled with myself to act ‘normal’. I was emotionally out of control and looking back now that was ‘okay’ because I’ve learnt that ‘it’s okay to not be okay’ and I wasn’t.

I didn’t drink my coffee that morning, instead I battled between the twist in my empty stomach and my tears the whole journey. I didn’t deserve the coffee anyway, Nate was fasting and he hadn’t ate since I had last woke him up for some milk at 3am. He was confused and angry with us. That hurt the most because I couldn’t reason with him, he’s too little to understand and in his eyes, we were starving him. 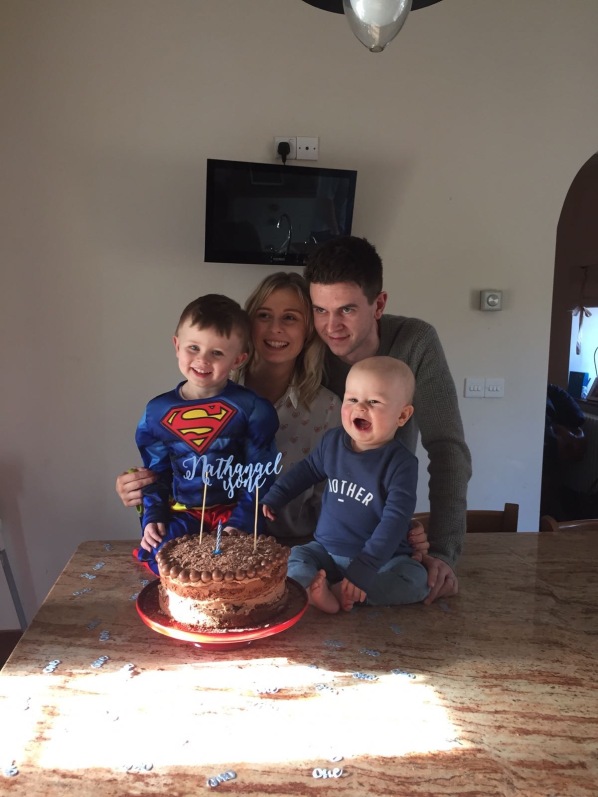 We arrived and there it was wrote in big letters that knifed me so deep ‘Cancer Centre’, I had never owned up to that word. It was probably part of the denial but up to this point we talked about tumours and ‘Wilms’ but here it was right in front of me ‘Cancer’. My son had ‘Cancer’

It sounds ridiculous after all your reading a blog called ‘Coffee, Crayons and Cancer’ but up to that point I was unable to admit it. It was too raw and painful but worse of all it scared me so badly that I convinced myself if we didn’t mention that word then surely, we can escape the nightmare that accompanies it.

I think it has that effect on us, that six letter word threatens everything that is important to you, it changes the world as we know it and it presents a journey that no parent could have ever imagined they’d be asked to walk with alongside their child. I’m stronger now and although it still frightens me, I won’t let cancer beat us. When I started writing this blog we were well into Nates treatment and I knew that we had a long road ahead but most importantly I knew no matter what my little boy was stronger than any six-letter word will ever be.

Even so that day back then was hard, the words above the door threatened me yet I had to push my baby boy two days after his first birthday into the Cancer Centre at the City Hospital for Radiotherapy. Nate was so brave and fearless that Paul and I had to be the same, he was hungry and confused but albiet still smiled at everyone he met. 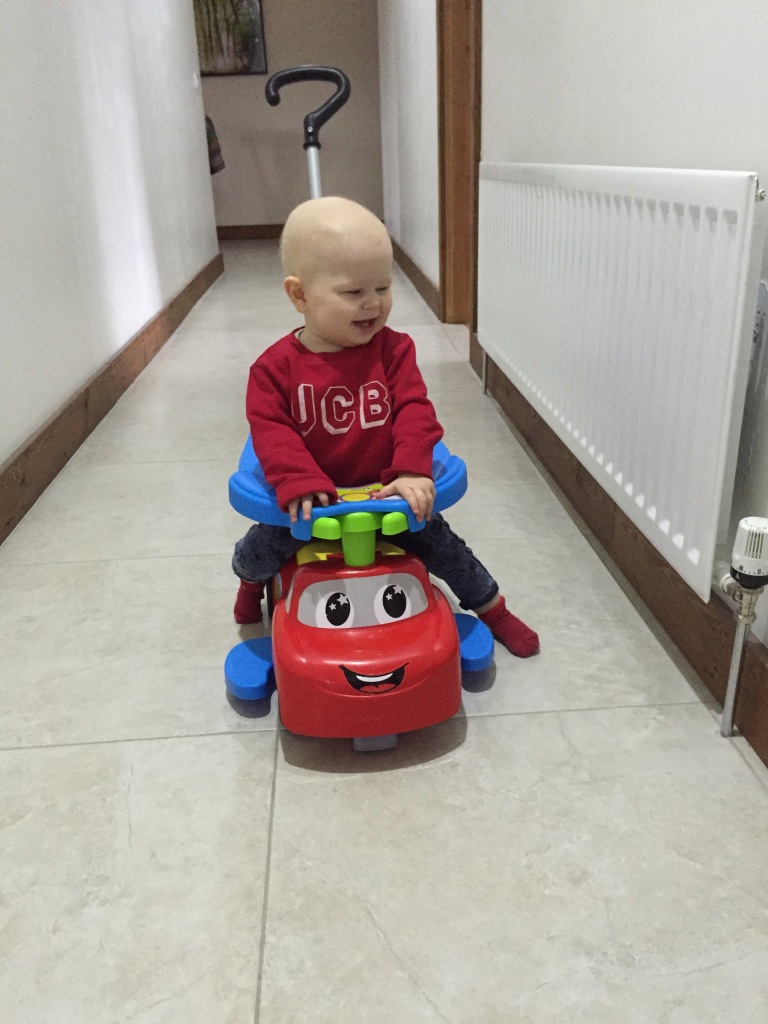 A team came specifically from the children’s hospital to support us, an anaesthetist, a technician and two nurses greeted us as if it was a usual morning. They were strangers to us at this stage and I kept it together so well.  Every time my chin wobbled Paul made me look at Nate and would joke that Nate would be affronted if I ruined his cool boyish charm. It was terrifying though not only was he getting radiotherapy this was the beginning of Nathanael being put to sleep for twenty consecutive mornings.

If ever we relied on our ‘One Day at a Time’ moto it was now.

We knew the drill though, Nathanael had been for planning and his body had been marked out in preparation. We took him into the room, stripped him naked and he sat happily on my knee while they put him to sleep. He drifted off carefree and a team surrounded us taking his floppy body from me, ready to take control of his breathing and set him up. “Okay mummy and daddy you can head on out, we will bring him to you when we are finished’. I wanted so badly to beg for them not to do this and to stop it all but it wasn’t their fault. Cancer had done this and we had to just follow the journey. I didn’t protest as much as my mind was yelling at me to, instead I walked out with Paul holding tightly onto Nate clothes.

My whole body felt numb and tears just came from nowhere. I was concentrating so hard on stopping them, the waiting room was frightfully packed with adults staring at the ‘couple with the baby’ but I just didn’t care.

A jolly radiographer seen my tears and kindly offered some comfort, as she left she said “Don’t worry mummy it’s just like an x-ray.” Her words slapped me so hard, did she not understand? Surely she knew that this was nothing like an x-ray? My barely one year old was having his first session of radiotherapy, he was the only child in a cancer centre full of adults and she thought she would help with those words. I was over emotional and sensitive but her words were so flippant and I often think of her, she was kind and meant well but she had no understanding. Like I always say though I hope she never understands, I hope that her children are happy and healthy, and that she lives in my old world were children ‘don’t get sick’ and when they do it’s sad but not crippling sad because she’s the onlooker not the sufferer. I never want her to feel that pain. I never want her to feel my pain.

Nate arrived back and true to his usual style when the anaesthetic wore off he smiled a sleepy smile and shouted for attention and most importantly food. My little boy was as perfect as always and on the outside we could see no change, no marks, no nothing. I don’t know what we had expected but that was it. It was over, he had his first session and just like that we walked out of the centre with a fear for what the next 19days had in store for our baby boy. Knowing that it was just a case of taking ‘One Day at a Time’. 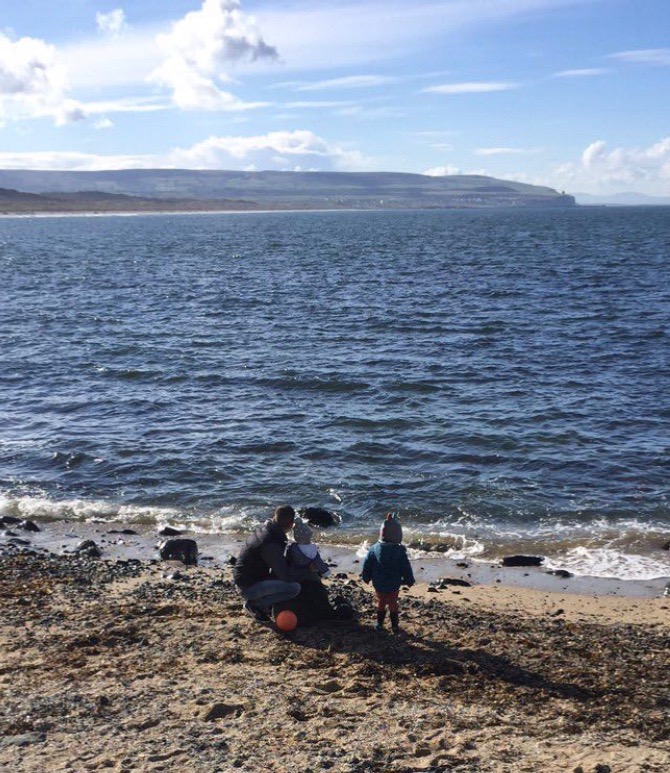